RAY raises the bets, slot machines can now pay off up to 5000 Euro 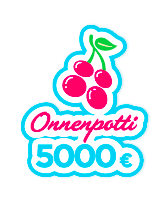 Since the beginning of June customers of RAY, a Finnish slotmachine monoply, have had the chance to take out winnings reaching up to 5000 euro. The larger loot is only available to registered customers of the company.

The valued customer system has been in use since August 2012. Before the registered customers have had the chance to win a maximum of 1000 Euro in the traditional slot machines.

According to the company the move had to be done so that slot machines can compete with modern online gaming.